Photo by Sam Power on Unsplash

The Apex project from NVIDIA is touted as a PyTorch extension that let developers do mixed precision and distributed training “with 4 or fewer line changes to the existing code”. It’s been out for a while (circa June 2018) and seems to be well received (huggingface/pytorch-pretrained-BERT uses Apex to do 16-bit training). So I decided to give it a try. This post documents what I’ve learned.

Spoiler: The answer to the question in the subtitle — yes and no. Yes, Apex and mixed precision training help you save GPU memory and thus allow bigger models and bigger batches under the same hardware limitation. But no, it most likely won’t speed up the training on a pre-Volta graphic card, unless the model is heavy on bandwidth operations.

What is Mixed Precision Training

By switching to 16-bit, we’ll be using half the memory and theoretically less computation at the expense of the available number range and precision. However, pure 16-bit training creates a lot of problems for us (imprecise weight updates, gradient underflow and overflow). Mixed precision training alleviate these problems.

For a more technical introduction, refer to “Mixed-Precision Training of Deep Neural Networks” by Paulius Micikevicius.

How to Use Apex

In this post we’ll only cover the mixed precision training part of Apex, not the distributed training part (since I only have one GPU).

Apex recently changed its API to a unified one for all “optimization levels”. And the “4 lines of code” in the punchline has reduced to “3 lines of code”.

Changes to the Existing Code

I modified thesimple PyTorch wrapper I wrote(ceshine/pytorch_helper_bot) and made it compatible with Apex (using the new API). Here’s how I do it.

First of all, try to import Apex and set a flag if successful (“amp” stands for Automatic Mixed Precision):

I use a class attribute use_amp to tell the trainer that I have passed amp-modified model and optimizer to it (APEX_AVAILABLE must be true if use_amp is true). The next step is updating the back-propagation part of the code:

Finally, we need to initialize the PyTorch model and optimizer outside of the wrapper:

That’s it! This is the minimal code changes required to do mixed precision training with Apex.

For gradient clipping, we need to use amp.master_params to retrieve the master weights and the unscaled gradients (in FP32):

At some optimization levels the optimizer returned by amp.initialize is an apex.fp16_utils.fp16_optimizer import FP16_Optimizer instance, which will break the standard learning rate schedulers since it’s not a subclass of torch.optim.Optimizer. A hacky way to solve this is to override the constructor (__init__):

Honestly I did not write tests to check if learning rate schedulers works the same way with FP16_Opimizer instances, but in my experiment they seem to work the way as expected.

I tried to train some models on the Cifar10 dataset with Apex. The GPU used is a GTX 1070 (Pascal architecture). The code is not really publication-ready yet, but here’s the link for those who are interested: ceshine/apex_pytorch_cifar_experiment.

So no speed gain by switching to FP16 or O1/O2, but the memory usage did drop significantly. This is consistent with the numbers reported in znxlwm/pytorch-apex-experiment which conducted extensive experiments on different GPUs and precision levels with a VGG16 model. 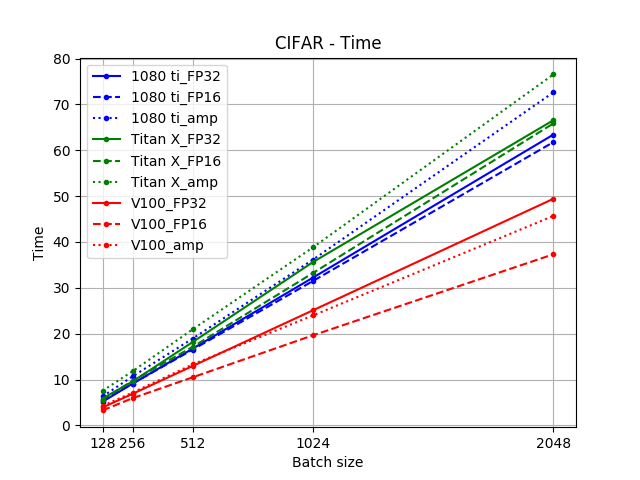 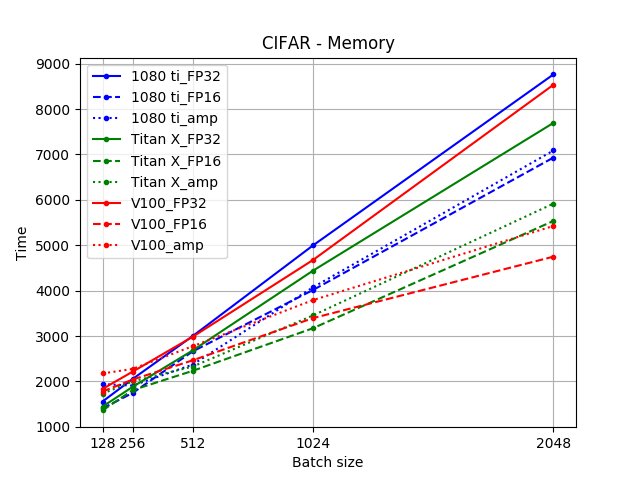 source (The unit of the y-axis is actually MB)

The following thread addressed the question quite well: Do I need tensor cores to benefit from Mixed-Precision training? · Issue #76 · NVIDIA/apex.

Some non-Volta cards (like the P100) can benefit from half-precision arithmetic for certain networks, but the numerical stability is much less reliable (even with Apex tools)

This is probably why I only manage to get SGD to work with FP16 (Adam works fine with O2 and O3, though).

In the Pascal cards, the FP16 operations are actually done in FP32, so you only saves the memory and bandwidth, not the computation. The extra overhead of converting precision (in PyTorch) also slows down the process.

For FP16 tensors, this traffic is FP16. Once the data reaches the cores, it is stored in registers as FP32, operated on in FP32, and written back to dram once again as FP16.